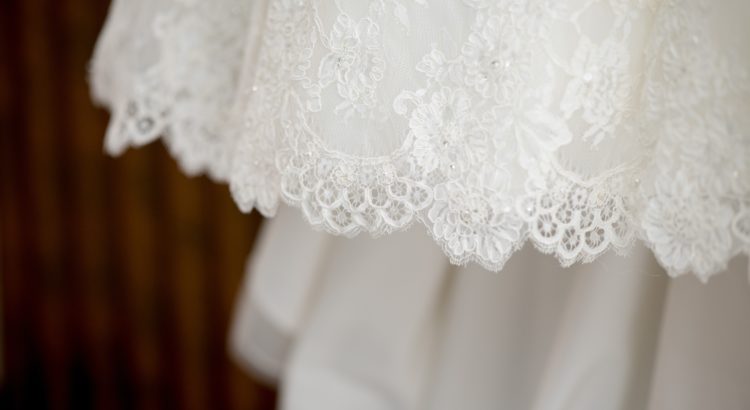 The history of lace dresses – in the 19th-century popular science publications, the story of Arachne, a Greek princess, often appeared. She was a skilled lace maker. She competed for the title of the best lace maker with the goddess Athena herself – the patron of all women’s crafts. The competition was to show who is the real master of handicraft. Some researchers believe that products that can be described as lace already existed in ancient Egypt.

In the tombs there, fabrics were found that can be treated as a kind of specific woven, resembling mesh lace forms. It is known that in Byzantium, luxurious openwork fabrics were popular, created by extruding fibers. However, it was not lace, although it looked very similar.

Where are the laces from?

In the Middle Ages, the English “opus araneum”, or “work of a spider”, was especially valued. It was a delicate fabric produced in nunneries in the British Isles. They were supposed to resemble fog or a spider’s web. It was probably then that the hemstitch appeared, which can be interpreted as opus araneum, although it is not lace itself. Perhaps even then young women sewed lace dresses for themselves. In the Middle Ages, fabrics with cut-out patterns depicting geometric or floral motifs were also popular. Properly cut holes were sewn so as not to fray. Very often, this type of fabric was applied to dresses with a contrasting color in order to emphasize the decorative motif. However, when it comes to a certain source about lace and its everyday functioning, it was the first information to appear in the inventory of sisters Angela and Hipolita Sforza. A document from 1493 mentions a “tape made of twelve blocks to hem a shirt” worn as underwear or undergarments, over which day or festive clothing was put on. So lace many years ago had many uses. Not only lace dresses were sewn from it, but also underwear and other items of clothing.

A great fan of lace – Elizabeth I

She is definitely one of the historical figures commonly associated with the lace ruff, although it was not an English invention. Elizabeth I is an exceptional monarch, not only an efficient ruler, but also a brilliant politician. The queen was able to consciously use the then fashion to strengthen her power. Through carefully selected clothes, she communicated various types of information that were to be properly read by the subjects, the court, ambassadors and rulers of other countries. Among them, there was certainly no shortage of lace dresses. In her case, the outfit was not just decoration, it wasn’t just about extravagance and the desire to stand out. Properly selected outfit gave her seriousness and respect among her subjects. This was especially important in post-Reformation England, where the Queen, as the head of the Anglican Church, she was automatically its symbol and acquired, in the opinion of her subjects, “divine” features. The monarch’s dress was treated as a visual manifestation of this “divinity”. Elizabeth wore lacy, extravagant ruffs, elaborate cuffs, which in practice were very uncomfortable and often required many hours of preparation. The lace details of the outfit had to be properly arranged, ironed, some elements sewn on and secured so that they would not fall off during the ceremony. All these stiffened laces weighed a lot and hampered movement. The unnatural posture of the queen resulting from the burden of the outfit affected the viewers. Properly arranged laces created a kind of fog, an aura, adding “divinity” to the monarch. The clothes necessarily made the queen unreal and at the same time very effectively strengthened the belief in the power of her majesty among her subjects. Lace in those days was already elegant and very extravagant. Thus, already in the Middle Ages, lace dresses settled at the royal court for good.

How did courtiers dress?

The attire of members of the court and wealthy townspeople copying the aristocracy featured spectacular lace ruffles, openwork inserts and mock-ups worn by both women and men. Historical portraits show that even lace pompoms on shoes were popular in men’s fashion. At the same time, in many countries there were bans on excessively dazzling with wealth, which was intended to strengthen native workshops and manufactures. Although lace dresses were the most popular in the richest circles, girls from poorer families also weaved lace dresses to please others. Even if they couldn’t afford expensive fabric, lace inserts were also very desirable.

Although there was no shortage of lace dresses at the royal court, not very wealthy ladies could sometimes think of beautiful creations. This is unthinkable today. Almost every woman has a lace beauty in her wardrobe. There are plenty of designs and styles to choose from. Every woman will find something for herself, regardless of taste. It is important to choose it according to your figure and taste.