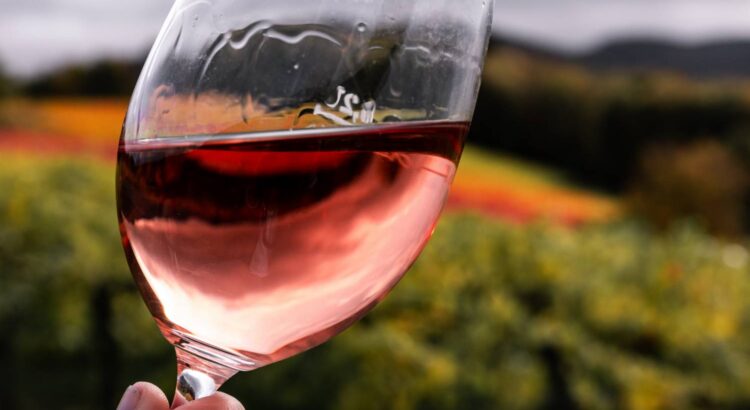 Blg is an abbreviation for a value called the Balling Scale. The name comes from the name of the researcher who developed this scale. It took place in 1843 in Prague, and the researcher was Carl Balling working at the local Polytechnic.
We can find both Blg and Blg with a circle denoting a degree (as with the Celsius temperature scale), or just B. Thanks to this scale, we can determine and provide information on the sugar content in a given solution – in this case, in wine.
The scale applies to liquids at a temperature of 20 degrees Celsius, at a standard pressure of 1013 hPa. It describes the percentage weight of sugar per kilogram of liquid. What does it mean? That if the wine has 5 Blg, then there will be 50 g of sugar per kilogram of the drink. Similarly – with 10 Blg, the amount of sugar will be 100g.

How to measure the Blg of wine?

The sugar content of wine affects its density, hence the device that determines the sugar content in the drink is often called a densimeter. Currently, there are various versions of this type of device on the market. You can even buy digital densimeters that subject the drink sample to a detailed analysis, taking into account not only Blg, but also, for example, alcohol content.

Much cheaper, however, are traditional handheld densimeters, also commonly known as sugar meters, wine meters or aerometers. They usually consist of two parts – a test tube and a float. It is on the float that the Blg density scale is applied.

To check Blg with such a winemeter, first take a sample of the fluid using a test tube. Importantly, it must be the purest liquid possible. It should not contain any solid elements, such as fruit particles. Air bubbles can also distort the measurement, so our sample should not contain them. We introduce such an amount of liquid into the wine gauge that the float can float freely in it. At this stage, it should not touch any of the walls of the test tube, nor of course its bottom. The upper surface of the liquid determines the place on the Blg scale, which is occupied by our drink at the moment. Just check how high the wine reaches and read the corresponding value on the scale. For ease of use, this scale is usually additionally marked with colors. The most common will be: pink or red, yellow and green.

How much Blg should wine have?

The density of the liquor varies depending on the stage of its fermentation. Therefore, the winemeter is a very convenient tool to check whether the fermentation is proceeding properly, i.e. nothing prevents our drink from maturing in the demijohn.

In fact, the first measurement of wine density is made before fermentation begins. We do this after squeezing the juice and cleaning it from fruit particles. If sugar is added to the wine before fermentation, it also needs to be done before measuring. It is assumed that before starting work in the demijohn, the density of the liquor should not exceed 22 Blg. On the scale, this value will usually be marked in pink or red,

When the wine is fermenting, we often drive the process further by adding more sugar. This is when the wine meter comes in handy again. When adding sugar, make sure that the indications of the device do not show a density higher than 16 Blg. Usually this will be the part of the scale that is marked in yellow.

How much Blg a wine should have after fermentation is largely dependent on what kind of wine we strive for. Most often it will be a dry or semi-sweet wine. Then the pointer should be within the green area of ​​the scale.

How many Blg do which wines have?

Accurate measurement of Blg makes it possible to determine what kind of wine we are dealing with. The classification we commonly use for this type of liquor has been regulated by law. We can check the values ​​corresponding to a given type of wine in the Regulation of the Minister of Agriculture and Rural Development of May 22, 2013. It concerns the types of fermented wine beverages and their classification.
Dry drinks according to this regulation should have less than 10 Blg. Up to 30 Blg per liter are semi-dry wines. Semi-sweet wines will have 30 to 60 Blg. Above 60 Blg, only sweet wines are distinguished.

How to convert Blg to alcohol?

However, the Blg scale is useful not only for checking the density of wine and supervising the course of fermentation of our drink. Thanks to such measurements, we can also check the strength of the wine, i.e. simply how much alcohol the drink contains. To calculate the percentage of alcohol we must first check the density of the wine in Blg at the beginning and at the end of fermentation, preferably with a winemeter. Substitute this value into the appropriate formula to calculate the alcohol strength.
The first step is to calculate the difference between the start and end Blg. If the wine was 22 Blg at the beginning and 2 Blg at the end, the difference is 20 Blg. This value is then divided by 2. In our example, 20 Blg divided in half equals 10 Blg. This is the approximate alcohol content of the drink. So it will be around 10%.